Roogalator were a much talked up band at the time of their January 1977 at The Nag’s Head.  Classified by many as ‘pub rock’ band, they had signed a one-off record deal with Stiff Records in 1976 but had moved to Virgin Records by 1977.  They played alongside many of the up and coming punk bands of the time and were included on the Hope and Anchor – Front Row Festival album released in March 1978.

The advert below is from The Bucks Free Press and tucked just above an advert for dance lessons held at the Palace cinema in Frogmoor. 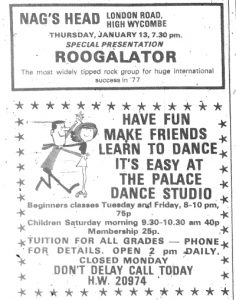