Rainbow FFolly, High Wycombe’s pop band in the making, debut album ‘Sallies Fforth’ hit the record shops on Friday 3rd May 1968.  With heavy pop and psychedelia influences from the time, the band were looking to hit the big-time, with 21 year old vocalists and lead guitarist Jonathan Dunsterville stating (with tongue in cheek) that his ambition from fame would be to own a ‘gold plated house’.  His dream didn’t quite work out but the album has since become a collector’s item and prompted the band to reform and release a follow-up some 38 years later!

Band ‘leader’ Jonathan Dunsterville was a former student at ‘High Wycombe College of Technology and Art’ and designed the cover for the album which had been partly recorded in the front room of Stewart Osborn’s house in London Road, High Wycombe – however, the main recording had been carried out at John Jackson’s legendary studio in Rickmansworth. The recordings were intended as demo tracks for distribution to record companies but EMI were so impressed they agreed to issue the recordings ‘as is’ on their Parlophone sister label – the same label the used at the time by The Beatles.

During my research for this article I found several mentions of the band in the 1968 editions of the Bucks Free Press. An article from 3 May 1968 – the day the album was released reports that a reception for the album was held at the EMI offices in London the week before its release. The BFP feature says the group made their way to the occasion using their ‘trusty ambulance’.  It also reports the fact that fans of the group had gathered in Hazlemere (at the home of Manager John Sparrowhawk) earlier that day to wish them off on their trip to London.  The ambulance they used for transporting their gear to gigs had been decorated with a clockwork key on the roof, rainbow coloured wheel hubs and cartoon caricatures of the group on the windows.  The band themselves wore what was their usual regalia – an assortment of Edwardian clothes, embroidered silks and silver jewellery.

The reception included a photo session with Paul Fleviz and Beatle label mate George Harrison was apparently on-hand to watch the boys pose for photos on top of the ambulance.  The photo also attracted the attention of nearby office workers, while a female traffic warden was put-off ticketing the ambulance via the gift of a Rainbow FFlolly card.  The band then continued their photo session in other well-known locations in London before ending the day by visiting HMV records in Oxford Street to see their album on special display.  Back in High Wycombe, local record outlets Percy Prior and W.H.Smith also had picture displays of the band to promote the release.

The album was followed by a single release, ‘Drive My Car’ (not The Beatles song). In August 1968 another Bucks Free Press article revealed they were due to play at the famous Star Club in Hamburg – the same venue where The Beatles had made a name for themselves earlier in the 1960’s.  The feature also said a tour of Canada had been planned – starting in Montreal and taking in most of the country.  Radio and television shows were also said to be planned in Canada.  By contrast UK dates appear to be fairly low-key but perhaps exclusive affairs?  Following the release of the album they played at a number of London clubs, including ‘Hatchetts’ in Piccadilly, while the BFP article from August 1968 claimed the band ‘have plans for a tour of East Anglia’.

The album also featured on BBC Radio One’s ‘Saturday Club’ show on 13 July 1968, where DJ Keith Skues gave the band close to 20 minutes of airtime. Sadly, for the band, the album and single crept under the radar and they split-up later in 1968.  However, over the years the Rainbow Ffolly recordings have acquired cult status.  That demand was partly responsible for the band reforming in 2016 to bring out a long-awaited follow-up – aptly named ‘Ffollow Up’.

There are a number of articles on the web relating to Rainbow Ffolly. I’ve listed what I have found below, including a website set up by the band in 2016 at the time of their new album.  Do you have connection with the band or remember seeing the band back in 1968?  Please get in touch, or post in the comments section.  Did they ever get to perform on Canadian TV?

http://www.psychedelicbabymag.com/2011/09/rainbow-ffolly-interview-with-roger.html – another interview with Roger Newell from 2011

My research for 1968 live gigs in High Wycombe unearthed a couple of early appearances by Mud – a group better known for the huge success they enjoyed between 1973 and 1976 (14 top 20 UK hit singles, including three number ones).

Mud had formed in Surrey in February 1966 and released their debut single ‘Flower Power’ in late 1967 and a follow-up ‘Up the Airy Mountain’ during the early months of 1968. They first played High Wycombe on Monday 29th January 1968 at The Townfield House in Totteridge Road (the road directly above High Wycombe railway station).  The venue (with a capacity of around 200) was home to the local Constituency Labour Party (C.L.P.) – it had been hosting gigs since 1967 – typically on evenings when other venues were not open.  The Mud gig was billed as ‘They play on Radio One’.  Admission was 4/6 (22 ½ p) for non-members and 3/6 (17 ½ p) for members.

It can only be assumed that the Townfield House gig was a success, as less than two weeks later they were back for an appearance at the much larger capacity Town Hall. The date of their second appearance was Saturday 10th February 1968, with the Bucks Free Press advert confirming ‘From London their name is MUD but their sound is sensational’. Admission was 5/- (25p).

For your listening pleasure
This is what Mud sounded like back in 1967 and 1968.

This page was initially written during the early months of 2018 as a brief introduction to my ongoing research of the history of live music in High Wycombe for the 50th anniversary of 1968. 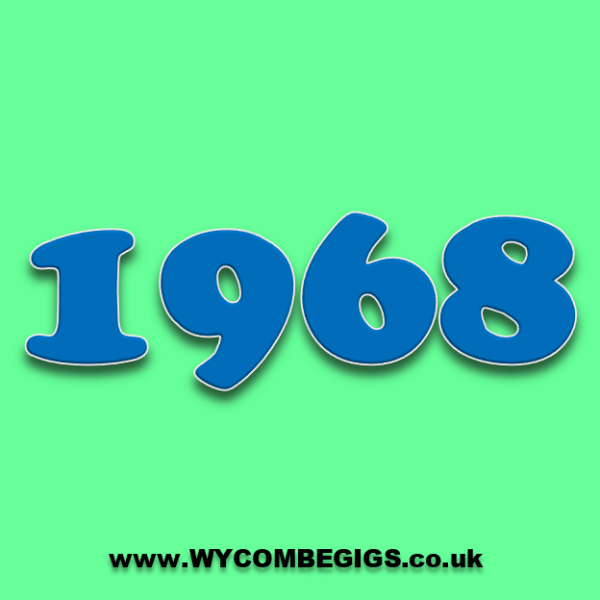 1968 saw another boom in the popularity of live music throughout the UK and the High Wycombe venues were quick to take advantage of the growing market. The already popular High Wycombe Town Hall, was eventually joined by what would become an iconic live music venue in the Town – The Nag’s Head in London Road.

Well-known names to appear at The Town Hall included Traffic, The Herd, Love Affair, Amen Corner and a return for the ever popular Move.  Legendary Rock ’n’ Rollers Bill Haley and The Comets would also appear at the Town Hall during the twilight of their career.

The Nag’s Head would kick into life in April 1968 when young promoter Ron Watts took his ‘Blues Loft’ events to the upstairs room – initially bringing in cult Blues artists ‘Champion’ Jack Dupree, Shakey Vick and Savoy Brown. Later in the year he would promote an early ‘out of London’ show for Jethro Tull.

During a year when High Wycombe town centre saw the building of their new Octagon shopping centre, other venues would also look to take advantage of the demand for hearing the latest music being played on BBC Radio 1 (launched in September 1967) – either through Discos or live gigs – this included The Townfield House in Totteridge Road who hosted a very early appearance for 1970’s glam rockets in the making, Mud.

I plan to feature articles relating to the most memorable and significant gigs of 1968. As mentioned, the research is ongoing and once again, I would be delighted to receive your High Wycombe music related memories and memorabilia from the year 1968. Please use the usual contact methods.

In the meantime, and as a brief insight into the musical landscape of 1968, take a scroll through the list from the link below and see how many tracks you are familiar with and then realise they are ALL from 1968 and a good half-dozen or so played High Wycombe during the same year!