The UK Subs made what is believed to be their first ever appearance in High Wycombe on Friday 2nd February 1979, with a gig at the Buckinghamshire College of Higher Education Student Union Bar.  The date is also significant as it was on this day that Sid Vicious was found dead in his New York flat following a heroin overdose.  Meanwhile, back in High Wycombe, according to music paper gig listings, there was also the choice of seeing Adam and The Ants appearing at The Nag’s Head.

The basis of what would become the UK Subs had been formed out of the 1976 London punk scene, when ‘30 something’ hairdresser, Charlie Harper pulled together a band that performed under various names before settling on ‘United Kingdom Subversives’ and then the abbreviated UK Subs for their first gigs around the summer of 1977.  John Peel sessions followed but it was not until September 1978 that they released their first studio recordings – a three track single on City Records featuring live favourites ‘C.I.D’., ‘Live in a Car’ and ‘B.I.C.’  Earlier in 1978 they had two live tracks included on the ‘Farewell to the Roxy’ LP.

The UK Subs line-up for their debut release was the same as the one that appeared at their High Wycombe appearance in February 1979:

This gig at The SU Bar pre-dated their signing to Gem Records and subsequent rise in popularity by a few months – their first widely available single, ‘Stranglehold’ would be released in June 1979 and they would return to High Wycombe to play the Town Hall twice more in 1979 to promote the single and their debut album release ‘Another Kind of Blues’.

The UK Subs still continued to perform at the time of this post – with lead vocalist – veteran rocker Charlie Harper the only common face throughout and aged 74 as of February 2019!  Their gigging history has seen them return to High Wycombe on a number of occasions – playing The Flint Cottage, White Horse and The Phoenix.  They were due to return to The Phoenix in November 2019 – an incredible 40 plus years since their appearance at the SU Bar back in February 1979.

Back in February 1979, a much younger (but still ‘old’) Harper would have heard the news of the death of Sid Vicious by the time his band took to the SU Bar stage.  Less than three years previous, Vicious (real name John Beverley) had seen The Sex Pistols in at the close by College Main Hall – a notorious character on the London ‘punk’ scene, he later became bass player for the Sex Pistols before the band split in January 1978.  He was just 21 years old at the time of his death.  The circumstances surrounding his death were still being discussed and analysed at the time of this post.

Advertised for the same evening as the UK Subs gig were Adam and The Ants at The Nag’s Head. The The London based band were fronted by Adam Ant (real name Stuart Goddard).  24 year old Goddard was in the stages of promoting his band, Adam and The Ants, formed around the summer of 1977 and on the back of the ‘punk’ explosion but starting to move more towards a ‘pop’ sound.  I’m unsure if the Nag’s Head appearance actually took place on 2nd February 1979.  It is listed in some publications as High Wycombe Town Hall but I can confirm the Town Hall appearance was a few days later on Monday 12th February 1979.  Perhaps The Nag’s Head was a warm-up date or simply never took place?

If the multiple events of Friday 2nd February 1979 weren’t enough to keep up interest at the time, local gig goers could have also taken in an appearance by Sham 69 at Aylesbury Friars on Wednesday 31st January 1979 – this was the gig where lead singer Jimmy Pursey claimed this would the final live appearance for this band – Pursey becoming increasingly frustrated with crowd trouble at Sham 69 gigs.  A day after The UK Subs gig at The SU Bar you could have travelled across to Friars again to see Stiff Little Fingers play as headliners on their Rough Trade tour to promote their recently released debut album, ‘Inflammable Material’.  A busy week!

Anybody with any memories or clarification of these gigs, please get in touch.

For your listening and viewing pleasure:

Skirtbox started playing back in 1997 and returned to High Wycombe for a 20th anniversary show at Bucks Student Union on Saturday 18th March 2017, with The Social Club and Fireapple Red advertised as support. However, it looked like The Social Club had to pull out at the last minute.

“A special one-off show to celebrate 20 years since the debut of the mighty Skirtbox!!! For many of these years the guys have been performing as JETTBLACK but its back to the fast and furious punk rock inspired years that we are remembering on this night, in the same year that Alternator Gigs celebrate 15 years of putting on gigs… one of the first ever ones involved Skirtbox back in 2002, a few gigs later Alternator put on Captain Everything! (with Howards Alias & Mustard Plug) members of the band also return for this night in their new band The Social Club! We are also pleased to announce that Fireapple Red will be joining the evening for a one off reunion show too. This show also marks Alternator’s return to Bucks SU after 2 years away!”

Check out other live music events at Buckinghamshire University via:

Just after the 41st anniversary of The Sex Pistols appearance at High Wycombe College on 20th February 1976, I discovered a preview of The Rag Week published in the Bucks Free Press Midweek on 10th February 1976.  The preview lists the event for the forthcoming week and leads off:

High Wycombe Rag Week 1976 kicks off on Friday morning with a Conga through the town. What follows is the now almost traditional week of pub crawls, races and dances in aid of charity.

The event is run by students at the Buckinghamshire College of Further Education – the former College of Technology and Art – and follows much the same line as in previous years.

“Pre-Rag Ball where the Rag Queen will be chosen”

You can’t mention Kilburn & The High Roads on a High Wycombe related publication without recalling the fact that lead singer Ian Dury was a former pupil at Wycombe Grammar School.  The then 33 year old Dury had formed K&TH back in 1971. There line-up included guitarist Keith Lucas (later to become Nick Cash, lead signer for punk band 999).  Dury would go on to form Ian Dury & The Blockheads in 1977. 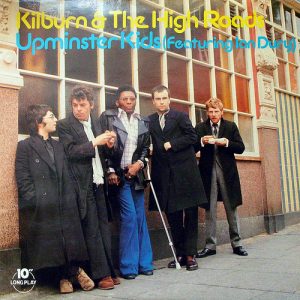 A quick internet search reveals Kokomo released their debut album in 1976. At the time of this post, they were about to embark on a March 2017 tour.

“Local and favourite band, Brewers Droop are performing at the Student Union bar”

“The Rag Week climaxes in The Rag Ball at the college main hall.”

This gig infamously including an early appearance for The Sex Pistols. It is often referred to as being the ‘Valentine Ball’ and in some cases a ‘Ron Watts promotion’.  Neither is true.  By Watts’ own admission, he was there to book a stripper. Valentine’s Day was the previous Saturday.

Another myth is that the Sex Pistols turned up announced; gate crashed and pretended to be the support act.  In fact, The Sex Pistols were a late addition to the line-up – arranged with full knowledge of the Student Union Social team who had agreed a half crate of Carlsberg as the payment for their appearance.