1967 – Celebrating 50 years since the birth of Psychedelia 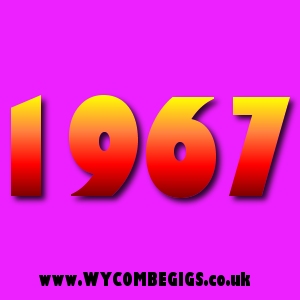 My initial research for wycombegigs.co.uk centred on High Wycombe’s part in the ‘punk’ explosion during late 1976 and particularly 1977. However, it soon became apparent that there had been a vibrant live music scene in High Wycombe stretching back to the early 1960’s.

The boom in live music coincided with the rise in popularity of Blues, Rock’n’Roll, simple ‘Pop/Rock’and what would be described as Psychedelia,  – all this was pushed on by the availability of electrified instruments, effects pedals, the outbreak of ‘Pop’ channels on the radio and a host of TV shows keen to show the latest acts.  Not to mention mind altering substances.

These are just some of the better known acts that played High Wycombe in 1967:

Small Faces, The Move, Geno Washington, The Who, Pink Floyd, Rod Stewart and the Jeff Beck Group.  I suspect more local groups emerged too, so if you have information, please get in touch.

When wycombegigs.co.uk was finally set live in February 2017, it seemed appropriate to celebrate the 50th anniversary of the happenings of 1967.  This appears to be a hugely transitional year for ‘pop music’. It was also at a time when High Wycombe was undergoing social development, including a spate of new venues eager to take advantage of the growing popularity of live music.

To set the scene back in early 1967 High Wycombe, the Town Hall appears to be only Town Centre venue that hosted live concerts.  However, as the year progressed, smaller venues would try to grab a piece of the live music action.  Pubs, such as The Nag’s Head and the smaller Rose & Crown would start to publicise live music, while other venues, such as The British Legion (close to the College) and The Needham Bowl (in Desborough Road) would also promote live music nights.

All this was happening as plans to construct a new shopping centre (The Octagon) in the Town Centre were coming to fruition.  This would include a fly-over that would cut through the heart of town.  The underside of the flyover would eventually house two more live music outlets.

Nationally, notable music events in 1967 included the June release of The Beatles Sgt. Pepper’s Lonely Hearts Club Band album.  Later that month The Beatles would perform “All You Need is Love” for Our World – the first worldwide television broadcast. The launch of BBC Radio 1 followed in September 1967, while locally, Wycombe Radio went to the airwaves in October 1967.

The same year High Wycombe was also still awaiting a ‘bye-pass’ to alleviate the traffic congestion caused by the fact that the A40 was the main connecting route from London to Oxford.  The first section of the ‘bye-pass’ would become the M40 and opened in June 1967 between Handycross and Stokenchurch.  Perhaps it was High Wycombe’s obvious midpoint location on the London to Oxford route that made it a popular stop off for bands during the 1960’s?

Throughout 2017 I plan to post details of the 1967 High Wycombe gigs.  These will be published on or around the 50th anniversary of each date.  Ten years later, ‘punk’ may have been the new scene but there is no denying the influence the acts that performed in 1967 had on their younger onlookers.  e.g. Small Faces/The Jam, The Who/Sex Pistols.  If you have any memories or memorabilia of 1967 gigs in High Wycombe, please get in touch or leave comments under this post or those for each gig.